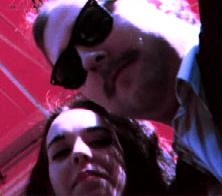 someone once thought i was a mixture of 1960s Gomez Addams and Jack Lord, though i'm sure the next day they thought it was Robert Kennedy and G Gordon Liddy! (coughs)
---
My personality analysis came out being a pretty close match to Martin Luther King, so i guess i follow my own path, with occasional shows of charisma, and a deep purpose to life.
[Introverted Intuitive Feeling Judging - Famous INFJs - Martin Luther King - Nicole Kidman - Jerry Seinfeld]
[intense, aloof funny]
---
[Beneath the quiet exterior, INFJs hold deep convictions about the weightier matters of life. Though affable and sympathetic to most, yet selective about their friends. Such a friendship is a symbiotic bond that transcends mere words. INFJs have a knack for fluency in communication. INFJs are true introverts, who can only be emotionally intimate and fulfilled with a chosen few from among their long-term friends, family, or obvious soul mates.]
---
I'm one of those rare eccentric people who wears always wears a suit and a cashmere sweater gardening or returning pop bottles!

one of those people call when they need a recipe, old films, a chess move, a poker lesson, or anything odd about history, vitamins, the occult, cheese, or trivia about JFK and Nixon! I think for half of my friends, i'm actually their shrink and psychiatrist. Just like James Coburn in the film, The President's Analyst!
It's probably because i'm a good listener, and great at analysis and problem solving, or offering advice
---
If I win a lottery, nothing much would change with me, just more books, pool tables and pinball machines
---
I've got a few thousand cookbooks, so I know what i'd wish for with a soulmate!
---
If anyone knows about Harold Bloom's literature booklist, that's a definately plus too
If someone enjoys DVD's from Criterion, Kino
Psychotronic Book of Film
I enjoy lots of 1960s and 1970s Television Shows
and Film, I like most anything from 1900 to 1985
fave period was 1960s film