Menu
So I was thinking, what if someone goes all Jurassic Park and makes a T-Rex and it gets loose and decides to live in my back yard forest? I had nothing that would be a good first choice for hunting a 5 ton predator. How did I miss acquiring a man portable tank destroyer rifle? What to do?

After pondering I hit upon a solution, kind of. Why not soup up a 12 gauge shotgun slug? The standard slug is about an ounce, 437 grains, at about 1,200 fps with a powder charge equivalent to 3 drams (1 dram ios a 16th of an ounce) of black powder.. Yes plenty deadly on deer and men, but kind of limited to game weighing less than 500 pounds.

Ib a Eureka moment I realized the solution lay in the past. A modern slug is .69 caliber and it fits inside a plastic cup with an out diameter of .729" which is withing a thousandth of an inch smaller than the inside diameter of the shotgun hull. Up in front of the barrel is a choke to narrow the .75 barrel and squeeze the shot (if an) into a tighter pattern. There also exist .730 diameter rifled chokes for those who wish to combine the benefit of a shotgun slug with the greater accuracy and range of a rifle.

My shotgun this week is a modern Italian copy of a Winchester model of 1887 lever action shotgun. You may recall Arnold stealing a short one from a biker and using it against the other robot in Terminator II. Mine is full size of course. So I added a rifled choke to it. It just screws on and off the barrel as desired. 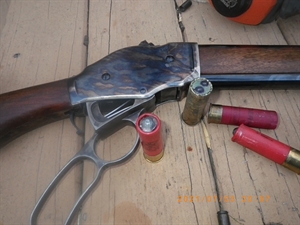 A little researh told me that when Winchester made the guns back in 1887 they Proof tested them for strength with a load of 9 drams of black powder and a 900 grain slug. My replica is exactly like old Winchesters except it is made of modern steel which is even stronger. Then I remembered that in 1842 when converting from smooth bore musket to a rifle the US Army began using a French bullet called a Minie Ball in caliber 69. That Minie Ball weighed 730 grains and is a pointed projectile designed for rifling. Lyman still makes molds to cast those bullets at home. I bought the mold. Then I loaded some 2 3/4" shotgun hulls with 5(!) drams of black powder, stuck a shot cup for slugs in there and shoved the Minie ball into that. Then I crimped it. 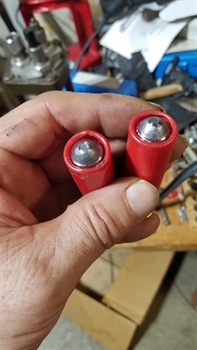 I test fired 2 of the shell today at a board 25 yards away at my backyard range. Yowza! It kicks easily at least 3 times as hard as a Martini-Henry or a standard 12 gauge slug. You really feel that Ooomph . I suspect I am driving the 730 gr. Minie ball at about 1,800 feet per second or more. I haven't chronographed the velocity yet, but if I am correct I have brought my little 12 gauge 5 shot lever gun up into the power class of a Nitro Express elephant gun. I don't know how many feet of bone o wood (not to mention flesh) it could blow through, but I suspect even a T-Rex would try to avoid finding out. 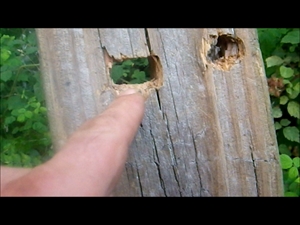 As the picture shows I need to adjust my slug shot cups because one of the two shots key holed while the other one didn't. I will play with that till I get consistent performance, then I will load up 25 or so of them and stick them away in a drawer somewhere just in case I ever have to hunt T-Rex or a n escaped Tiger in my back yard..

Happy 4th of July everyone.
::beer: