Menu
I found him at one wayside of our community when I fed other wild cats one day. He looked very small, about a week old, too small to eat. So I bought him back home, fed him with yoghourt, he can walk but stagger. My first adult male cat ( died of sick later) liked him, so it's easier to bring him up under our care. He was born with a good appetite so grew up fast. I gave him a name means "more water" in Chinese, simplely want him can drink more to avoid that troublesome urethral problem. Now he is more than 2 years old, had been experienced an urethral catheterization.

He has a natural gentle temper and get familar with me. He let me brush his back (including his tail), this become his daily morning rite. I can clean his ears, cut off his nails. But as a boy he has a strong territory consciousness, my home is his, so do my bed , but he only wants a bit of corner at the end of my bed. He loves his "territory" more than of his same kind , he seems want to take an adventure but fears of outside. I often open the door to let him free out and in, but he always end up with a faint voice from outside, fleding back as fast as he could, just like a frightened mouse. Even no voice , he will back on his own. 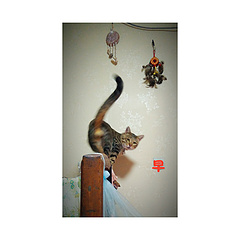 To avoid his loneliness, I put a water tank on the floor, 2 red golden fish live in with some small green plants . Sometimes we like two fools stay there watching fish make bubbles, he wants to fatch fish but merely limits on the surface of water... Anyway, this makes him drink more water from there. He has 30 small balls and a long rolling cage. Not too much play tools but enough for him to play with. Actually, he likes play tracing game with me . Poor me how can a two legs tracing four legs. Espeially when he runs to under wardrobe ... but it's a cheerful moment we made.

Some days ago, a lady who has 3 cats at home came to visit me. My cat smell her carefully, suddenly began unusual, crying loudly, a kind of special cry like mating?This is the first time I saw him so excessive before others. He was not juming off from her legs just kepting crying loud toward her for a long time. My friend happied with laughed and said :" Haha...your cat look like talking to me, he can speak!" I know my poor cat might triggered by the pheromones of cats she brought in ... but how can I grumble? She is kind-hearted on cats and dogs, and feeds wild cats near her home twice a day. As for me, I no more touch other cats outside, especially those female cats... because my cat is really a smell detective. I should be keep clean. 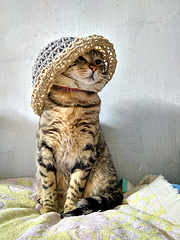 I need to sleep now, my cat is calling me.